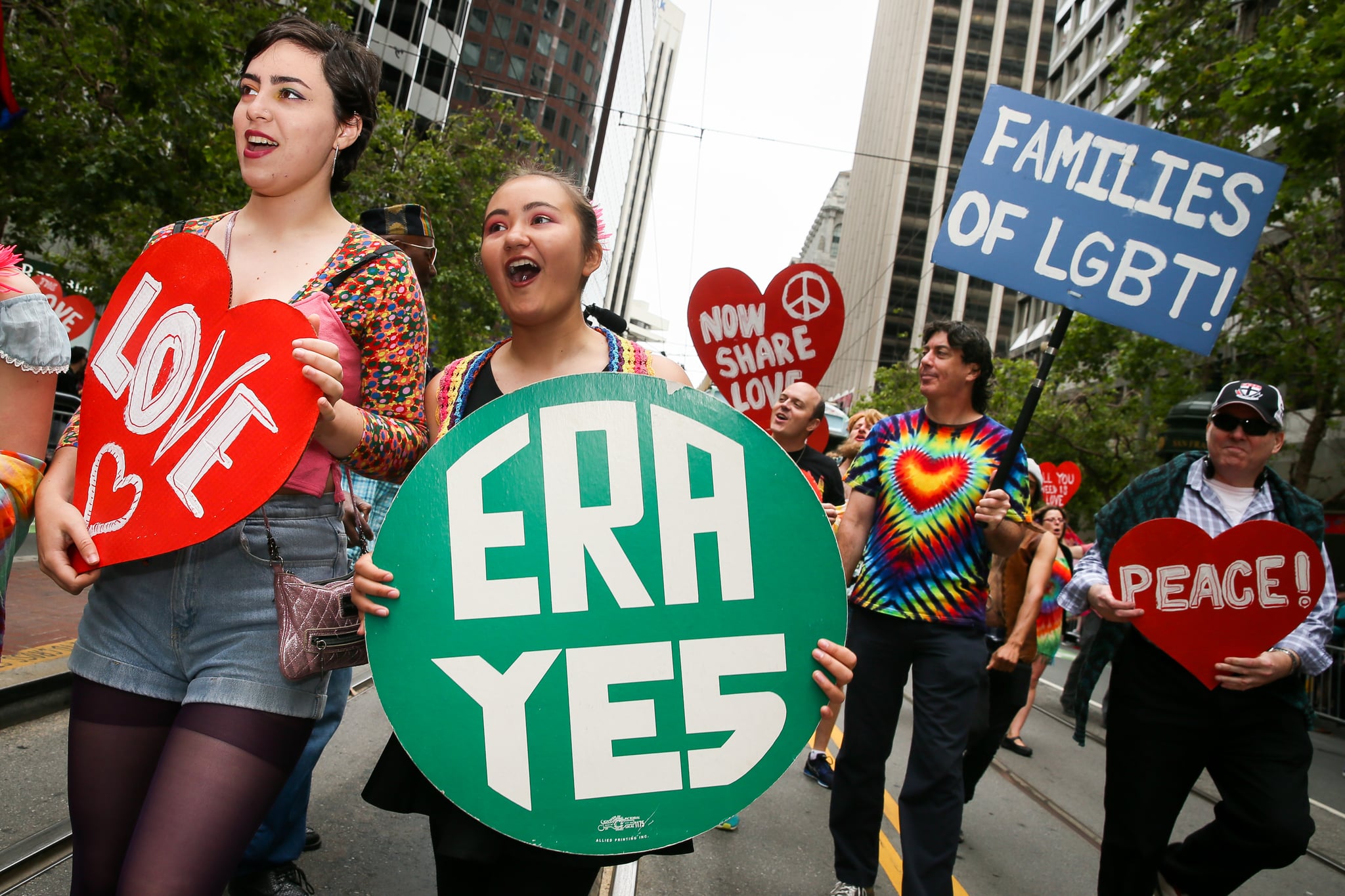 On a very surface level, it might look like our gender problems are fixed — or on the road to being fixed. But look closer, and institutionalized, sexist oppression, gendered violence, and workplace discrimination remains pervasive and everywhere. And this month, especially, we all need to remember the Equal Rights Amendment still has yet to be passed. The ERA, a proposed Constitutional amendment that would accord women equal legal rights and status as men, was introduced to Congress almost a century ago. Eighty-percent of respondents to one 2016 survey erroneously believed men and women already have equal rights under the Constitution. That's untrue — and exactly what the ERA was written to address.

Policies from the Trump administration — and many state governments emboldened by that administration — to see how society is harming women or pushing them out of public life by denying them life-saving reproductive health care and protecting sexual abusers. If anything, the ERA is just as necessary as it was when it was first introduced.

How the ERA Was Born

Originally written by the famous suffragettes Alice Paul and Crystal Eastman, the ERA was first introduced to Congress in 1921. After languishing for decades, it gained massive traction in the 1970s, and its ratification once seemed like a certainty. But in the face of a heated, highly effective resistance led by conservative women, the amendment ultimately failed to be ratified by a majority (38) of states before expiring. Despite it, state legislatures are still considering and voting on the ERA, and as of last summer, Illinois became the 37th state to ratify the ERA. (The Florida, Arizona, North Carolina, South Carolina and Georgia state legislatures are all currently considering bills to ratify the ERA.) 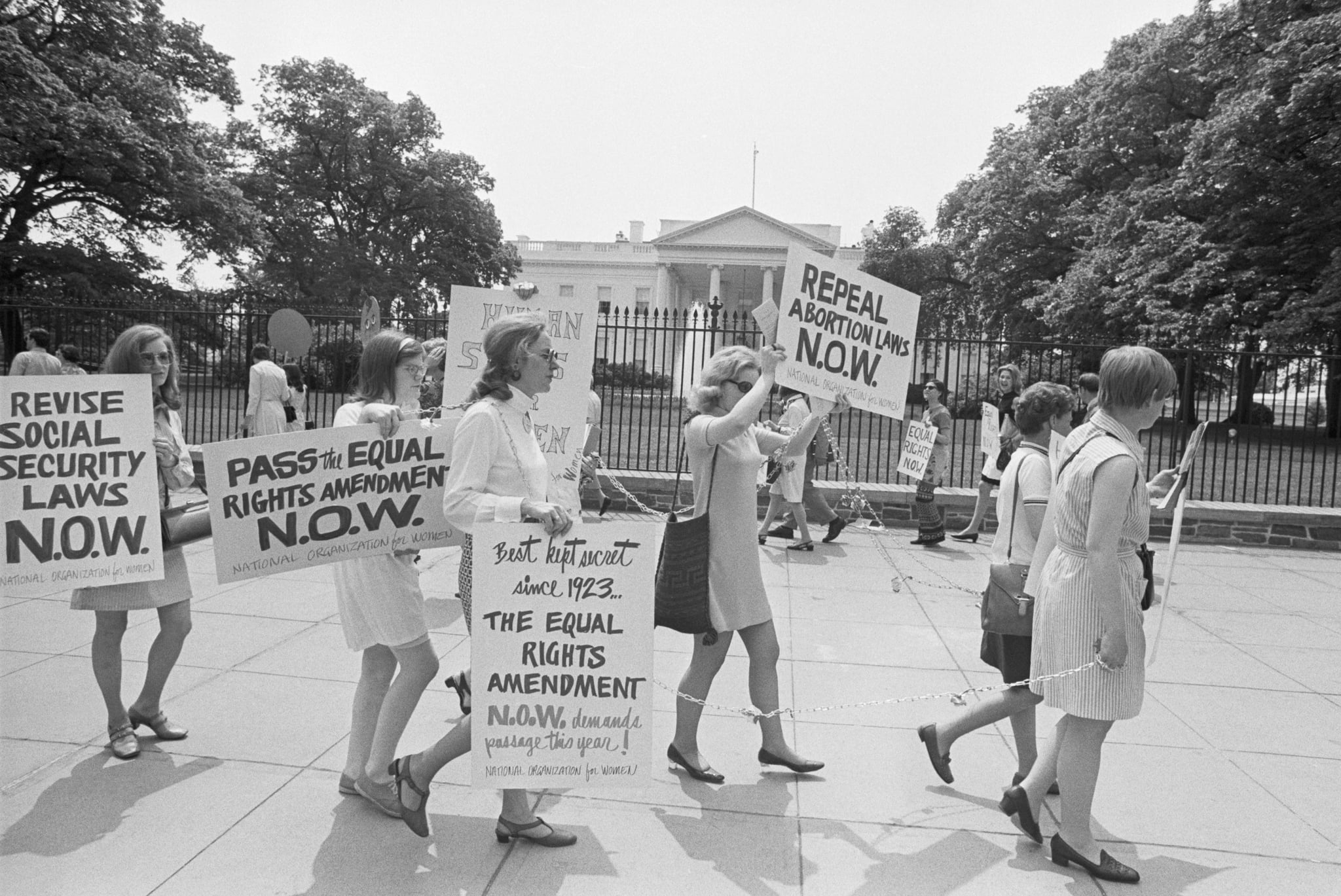 The National Organisation for Women protests outside the White House in 1969. Protesters wore chains laced with flowers to fight for the passage of the ERA. Photo courtesy: Bettman / Getty Images.

In the 1970s, the United States saw landmark victories for women's rights, including the right of single women to legally access birth control in 1972, and the right to access safe, legal abortion in 1973. But despite coming close, the ERA was ultimately blocked by a salient, well-organised opposition movement, which relied on fear-mongering and gendered hypotheticals to persuade the American public. Conservative activist Phyllis Schlafly became the leader and face of the opposition, asserting the ERA would cause American women to be drafted to wars, lose "protective legislation" that accorded them safer working conditions than male laborers, and be forced away from their children and households.

Schlafly, a lawyer and housewife from Illinois, founded the Stop ERA group and led what's become known as one of the first grassroots conservative movements in the U.S. Schlafly started by distributing pamphlets in the street, and publishing op-eds in local newspapers. Some of her op-eds included such choice lines as, "Women's libbers are promoting free sex instead of the 'slavery of marriage,'" and "They [feminists] are promoting Federal 'day-care centres' for babies instead of homes ... abortions instead of families." 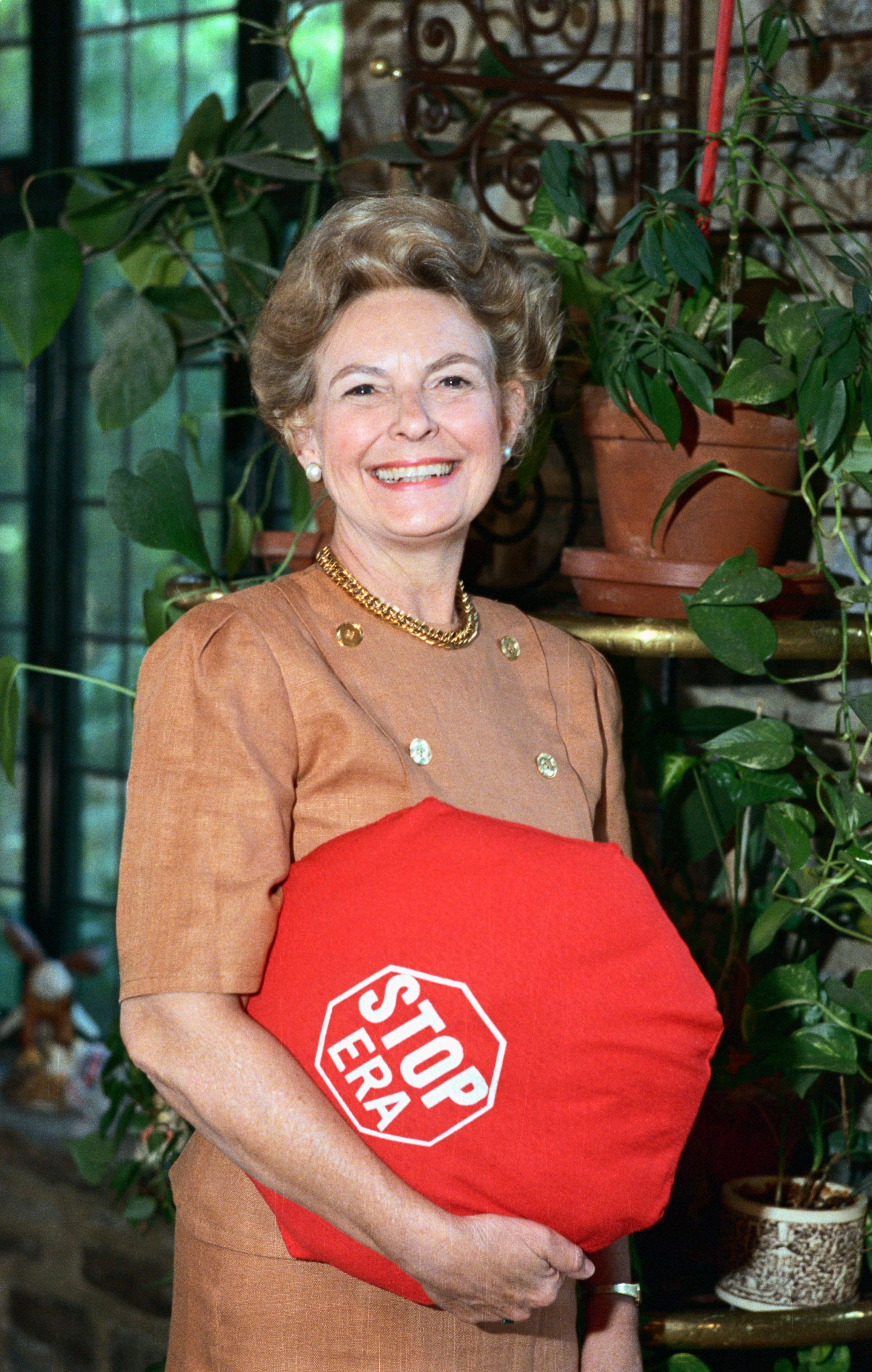 Schlafly's primary arguments were and are pretty easily debunked: Most feminists and ERA supporters oppose the draft for men and women; support fair and safe labor policies for male and female laborers; and support women making fully autonomous decisions in domestic life and child-rearing. But the gist of her argument — that the ERA would endanger women by necessitating sweepingly equal treatment of men and women — remains salient and controversial to this day.

At the core of these historical and persistent arguments against the ERA is a debate over equality and equity: whether we should apply sweepingly equal treatment to people with vastly different experiences and needs, or simply accord people equal status and legal rights, while acknowledging differences in those experiences and needs.

For example, demanding equal treatment of women and men could be actively harmful to women, if it meant eliminating women's empowerment programs and scholarships or diversity standards meant to uplift and recruit women into fields where they are underrepresented. In the absence of such programs, which recognise the inherent place of disadvantage women come from in male-dominated fields, we build upon and expand existing inequality. But the ERA would crucially recognise American citizens as having equal status and legal rights regardless of gender, rather than mandate indiscriminate, equal treatment of men and women.

Why We Need the ERA Today

It's critical that we finally codify the equality of the sexes into the law of the land, and ensure our laws reflect today's increasingly — albeit strained — egalitarian culture through the ratification of the Equal Rights Amendment. The ERA could play a role in nearly every modern women's rights struggle, from the mounting war on reproductive rights and endemic sexual violence, to safety and equal pay and opportunity in the workforce.

Specifically, as legal advocates for the ERA have argued, the amendment could protect women from pregnancy and motherhood discrimination, guarantee equal pay, and formally recognise sexual assault and rape as sex discrimination. Lenora Lapidus, director of the Women's Right's Project at the ACLU, told Cosmopolitan: "The ERA would make it clear once and for all there can be no discrimination on the basis of sex. There can be no differential treatment of individuals based on their gender."

In recent years, access to reproductive health care has been steadily eroded to the extent that millennial women's living standards in the context of maternal health and maternal death rates are substantially worse off than their mothers'. Ninety percent of U.S. counties lack abortion providers, due to an influx of discriminatory laws enacted in the last decade. Since Roe v. Wade, 1,200 laws targeting women's right to abortion access have been enacted, and more than a third of these laws were passed between 2011 and 2018 alone.

The Equal Rights Amendment could be critical to reasserting women's equal right to safety and full reproductive decision-making power in their bodies, especially in the event that Roe is dismantled or reversed in the coming years. By granting women equal status and legal rights, the ERA could be used to grant women the same right to privacy and bodily autonomy that male citizens have.

Similarly, sexual assault rates remain high, targeting an estimated one in five women, while non-reporting rates stand between about 65 to 85 percent. Sexual harassment and misconduct remain prevalent in workplaces, forcing women out of jobs, industries, education, and public life. The ERA could play a critical role in supporting the rights of survivors, and protecting the safety and inclusion of women in public spaces — including offices, by asserting their equal legal right to safe, nonviolent workplaces. The amendment could also be central to combating the gender wage gap and protecting equitable options and opportunities, by requiring equal compensation for equal work, and formally recognising the gender wage gap as discrimination.

Where Does the ERA Stand, Today?

Democratic presidential candidate Kamala Harris stated explicitly last month that fighting for the ratification of the ERA would be a priority of her presidential administration. Harris is one of several leading Democratic lawmakers and feminist activists who have publicly shifted attention and public pressure back to the amendment. 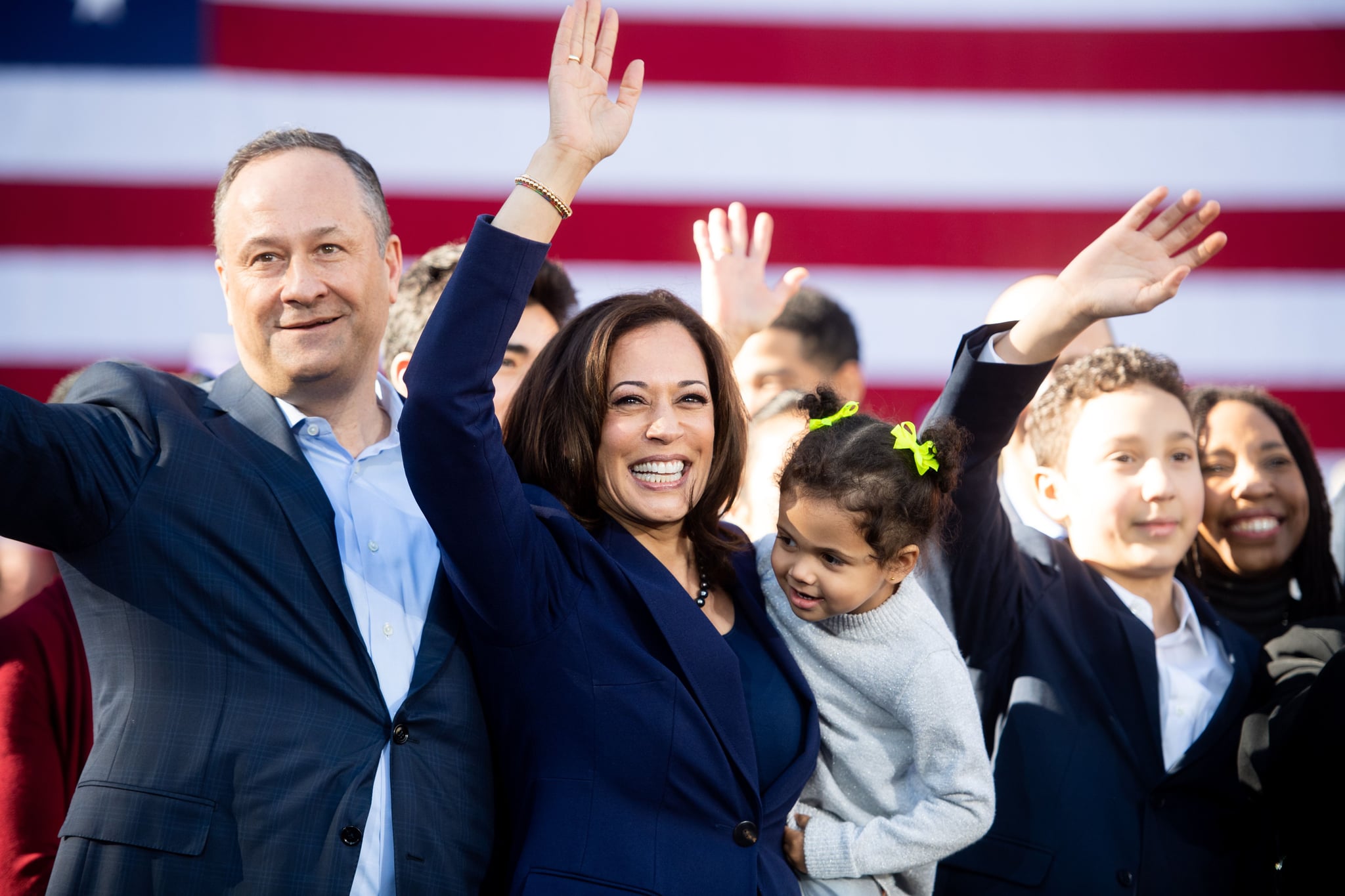 Sen. Kamala Harris at the kickoff of her 2020 presidential campaign in January. Photo courtesy: Getty Images.

Now that we're just one state away from the 38 state requirement for ratification, the ERA is a very real possibility. There is, of course, one caveat: The deadline for the amendment to be ratified by 38 states was 1982 — almost 40 years ago. At the end of 1982, only 35 states had ratified the amendment. Upon being ratified by 38 states, the validity of the ERA would likely face legal challenges because of this deadline.

A Democratic-controlled House of Representatives could bode well for passing legislation to ratify or establish a new deadline for the amendment in the future, which should underscore the critical nature of voting. And as the ERA Coalition has stated in response to Harris's declared support for the amendment, it's crucial that up and down the ballot, candidates express support for the ERA, and a determination to fight for its ratification.

As we celebrate Women's History Month, the Equal Rights Amendment is a central part of women's history, as it remains a piece of unfinished business within our lifetime. The ERA has the potential to fundamentally protect and expand women's rights, and promote tremendously important cultural shifts. And the amendment is entirely attainable if we remember and fight for it.

Award Season
Governor Andrew Cuomo Is About to Win His First-Ever Emmy — Yup, You Read That Right
by Yerin Kim 21/11/20

2020 Election
Politics and Relationships: How to Navigate Different Opinions
by Lacey Johnson 16/11/20

Kamala Harris
"This Is the Time to Heal": Joe Biden's Victory Speech Brings a Message of Hope and Unity
by Maggie Ryan 08/11/20
Latest News
×