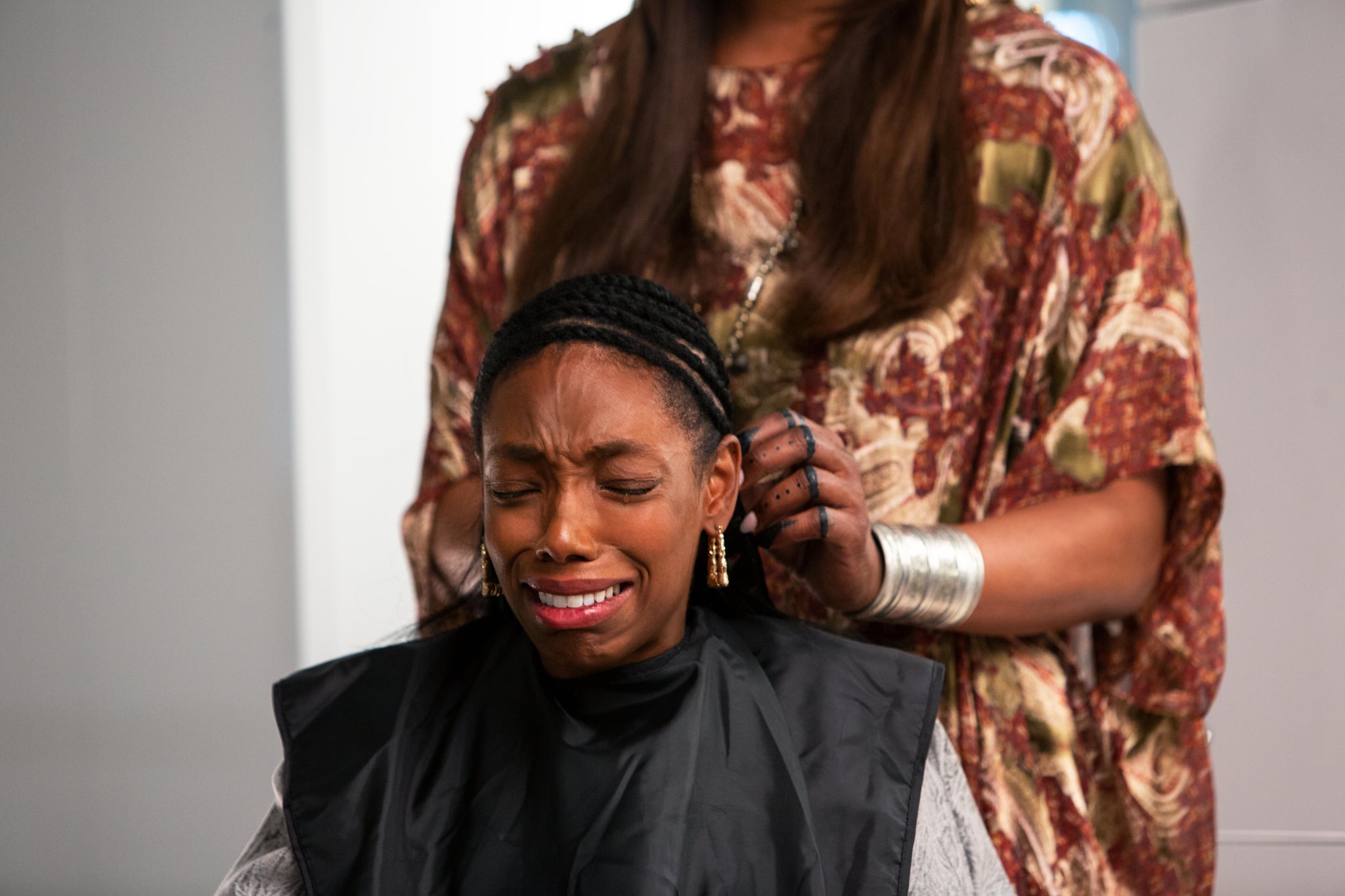 Growing up, once a week, my sister would straighten my 4a curly hair with either a blow dryer and hot comb or a box relaxer kit. I hated both. As a tender-headed girl, the first method made me feel like my hair was being pulled out of my head, but it was tolerable in comparison to the relaxer kit. That was an all-day process. First the formula penetrated the hair, then the neutraliser (a liquid that suppresses curls from surfacing) did the finishing touches.

The stinging from the harsh chemical ingredients felt as if I was being stung by multiple bees at the same time. It was terrible, but as a Black child, this was the process of looking "proper." I got a relaxer for school dances, picture day, and graduation. At a young age, I learned that straight hair was reserved — and expected — for important days. In Hulu's new horror-satire movie Bad Hair, Anna Bludso learns this same lesson.

Directed by Dear White People writer and director Justin Simien, the film follows around young Black creative Anna (played by Elle Lorraine). The opening scene shows young Anna getting a relaxer from her older sister, Linda. Anna is eager to get the relaxer out of her hair because it's stinging so badly, and her sister agrees to wash it out earlier than the box says while adding, "Don't get mad when you're just as nappy as you ever were." We then see the real damage of relaxers, as Anna's hair falls into Linda's hands. Although she follows exactly what the box says, the chemicals are too strong and leave a permanent hole in Anna's hair that traumatizes her well into her adulthood.

Throughout the film, there are flashbacks to that horrid scene painting a good foundation to who Anna grows up to be. An aspiring TV host, Anna works as an assistant to the leader of Cult (an MTV-type music company) for four years under the radar. Her longtime boss has decided to step down, leaving her with a new boss named Zora to prove herself to. While Zora is impressed by Anna's ideas she lays out as host, she explains that none of it will work if she doesn't change her hair, which she wears natural. "Wanna be one of my girls? Get your hair done," she says after learning that Anna styles her 4C textured hair on her own.

Watching the film, I was shocked that Zora, a Black woman herself, doesn't understand Anna's desire to protect and preserve her crown. If anything, she should understand the struggle to proudly wear natural hair. Don't get me wrong, I would have been easily as offended if Zora were white, but not as strongly because I've come to expect it and experienced it. Seeing a Black woman shame another Black woman for her natural hair was a further indication of how far idolising European standards has gone. It was a bold statement arguing that no matter how talented or groundbreaking your ideas are, straight hair is the only real chance Black women have at achieving their highest dreams.

This, of course, is false, but it's an extremely hard mentality to break. For Anna, she ends up following Zora's advice and gets a long, straight weave. Anna, who before felt invisible, starts getting all the right type of attention from her job, male prospects, and random strangers on the street. She feels electrified and powerful. The movie turns scary when the weave starts to have a life of its own and we learn it is demon-possessed with weave wearers of the past. The weave is after blood and activates at several points in the storyline, but it shouldn't be seen as the main point of the story. 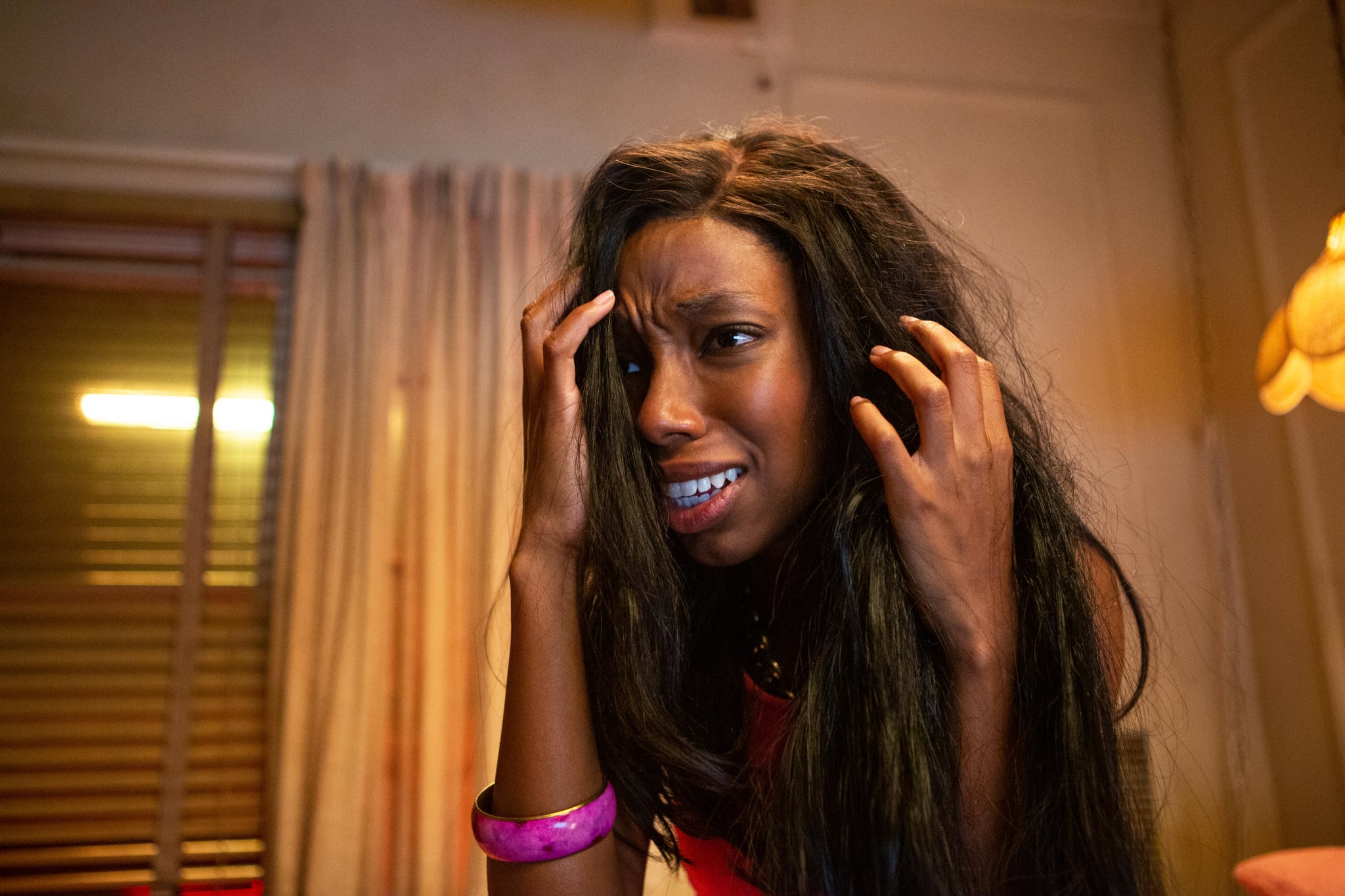 Anna spends months reworking the entire show and pivots Cult into a position of power and authority in the music business. Still, toward the end of the movie, there is a party to celebrate the new launch of the brand, and — just when she thinks she will get the praise and TV host position she's earned — she again is overlooked and forced to stay as an assistant. In other words, all her hard work despite the new hair was in vain.

Bad Hair is ironic and raw because it shows viewers all the horrific things Black women go through to have "acceptable" hair. The movie isn't necessarily scary, but it will inform an unaware audience of the issues Black women are trying to repair. It can be a daily challenge for Black women to feel good and comfortable in their own skin, and the movie does a great job of encourageing Black women not to chase weaves or synthetic hair treatments for the glory of white supremacy and career advancement.

Apart from the weave being demon-possessed, the entire film is something I've personally been living my whole life. I've been discriminated against in the workforce for wearing my natural textured hair. I've felt like I had to have straight hair for important meetings and interviews and to progress in my career. Unfortunately, you can only be what you see. And what I've seen in the corporate world is straight-haired women climb to the top and natural-hair women continuously omitted for roles that could complement their talent but seemingly don't match their appearance.

There is a level of fatigue being a Black woman in America. I'm so glad this movie came out this year, a year when the world is becoming increasingly aware of the challenges Black people face. The movie is a smart depiction of the inequalities that exist in the corporate world for Black women. I hope it inspires allies to continue to celebrate Black lives and to support movements like the CROWN Act that rule out race-based hair discrimination.

Skin Care
Look At This Stuff, 2021 Is Loaded With Beauty Gadgets and Gizmos A-Plenty
by Jessica Harrington 31/12/20
Latest Beauty
×